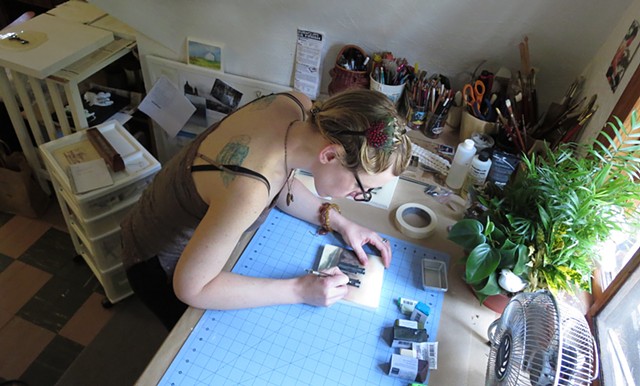 I make work derived from photographs that I have taken during explorations of historic and industrial sites, and modern ruins. When it is possible to do so without disturbing the site, I collect soil or debris from the location and incorporate it into the work. My imagery combines place, relic, consumer, and phantasm to produce a reflection of the visited space. I am interested in these sites for their historical value, their impact on rural and urban landscapes, as abstractions within our views of nature, and for the social residue or nostalgia that is left to be dissolved long past their demolition. While traveling and photographing sites over the last few years, I’ve realized that although I was most drawn to the spaces I visited due to their historical relevance, my eye was beginning to focus on the minutia. In an era where artists have been exploiting historic spaces to capture sweeping views of their haunting beauty defined as “ruin porn,” I’ve been searching for a way to capture the essence of the space. Not simply by its physical form but by the “stuff of stuff” – the dirt, dust, and bits of material left behind by humans, and deeply affected by time and nature. It is in these intimate levels of the space where hands have touched, the dirt builds up on a decaying wall, or the texture of the carpet where for years the rain had fallen in, that I see as the most defining. In Vedic literature, the “stuff of stuff” is not separated from the stuff of human existence. It is said that “…I am That, you are That, All this is That, and That is All there Is…”